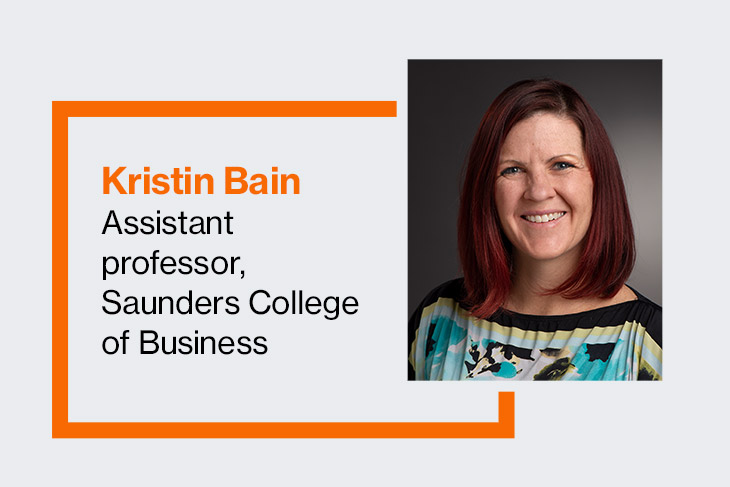 A recent study co-authored by RIT’s Kristin Bain found that a technique called amplification can boost your influence at work.

A recent study co-authored by Kristin Bain, assistant professor of management at Saunders College of Business at Rochester Institute of Technology, found that a simple technique can help boost your influence at work. That technique, called amplification, is the public endorsement of another person’s ideas with attribution.

In their study, “Amplifying Voice in Organizations,” Bain and her co-authors studied nearly 2,800 people and found that those who repeated or praised another’s idea during a meeting were viewed as more admired and influential than those who amplified their own ideas or stayed quiet. The person on the receiving end also benefited.

“We conducted a field study at a nonprofit,” said Bain. “First, we asked participants to rate how much respect and admiration they had for their team members. We then trained a small subset to use amplification in team meetings. After two weeks, we had the employees rate each other again. The findings were very telling.”

Overall, amplification proved to be a very effective tool to being viewed as highly respected and admired by your colleagues thus making you more influential at the company, said Bain. In contrast, people who promote their own work were found to be disliked.

“A lot of our studies included this comparison condition of promoting your own ideas versus promoting somebody else’s, and without fail, people did not like the people who promoted their own ideas,” Bain said.

The study also suggested that amplification can raise the profile of groups typically overlooked or discounted in organizations, namely women and people of color.

When the team focused their attention on low-status women in an organization versus high-status men, they found it did not matter who did the amplifying or who was amplified. Those doing either of those two things ended up with higher status regardless of gender, race, or ethnicity.

Status isn’t the only perk of using this technique. Amplification may also boost career development, the study found.

When asked which employees they would give a salary bonus or promotion to, the participants overwhelmingly chose the amplifiers.

“There could be a significant reputational benefit from this practice,” Bain said. “No matter what your current position is, everyone can gain something from amplification, and it can create a really positive work environment.”

The results of this research have garnered national attention. Forbes, Business Insider, and CNBC have reported on these findings, and influential business leaders like Adam Grant have shared the study with their networks via social media.

Next, Bain and her partners are studying how incivility levels in groups affect people’s willingness to speak up in a group. They’re exploring if and how amplification can offset uncivil behaviors, like eye rolling or interrupting.